Is Google Play for Education Dead? 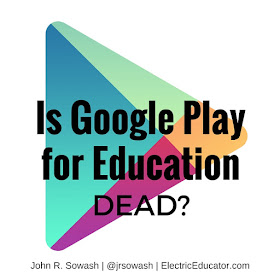 Less than 3 years after its launch, Google is pulling the plug and Google Play for Education, as reported by CRN.


"[Google] confirmed to CRN on Friday it will cease selling Play for Education licenses to partner tablet vendors March 14. Google said it will continue supporting all existing accounts, allowing current customers to access the education-focused app store for as long as their devices are in service."

This is a startling change, especially for schools that have only recently adopted Android tablets. As recently as this school year Google has heavily promoted Android adoption in schools through a special package offered by hardware re-sellers.

Here are three reason's this announcement isn't a surprise, and shouldn't cause panic:

1. Google has already hinted about the "merging" of ChromeOS and Android.
Everyone was freaking out about ChromeOS being merged into Android. Well, the opposite (kind of) happened. GP4E is being phased out, and will [likely] somehow be rolled into ChromeOS.

2. Google's mobile device management controls have gotten better.
Google has slowly added administrative controls for Android devices through the admin console. I will be the first to admit that these are NOT a full replacement for GP4E (no app pushing), but they are a start.

3. Chromebooks are better anyway
Google Play for Education never really captured the hearts or minds of school leaders or teachers. At least not compared with Chromebooks. Why? Chromebooks are cheaper, easier to manage, and have more features than Android Tablets.

Sadly, this point is little comfort to schools that have already invested in the Android ecosystem. I'm sorry. = (

Google has a PR crisis on their hands given the nature of this major [leaked] announcement. I certainly hope that they provide a LOT more clarity and explanation regarding this decision and the future of all of their platforms.

This announcement, while frustrating, is NOT the end; it is likely just the beginning. We will likely learn more during Google I/O, May 18-20.