The future of Android on ChromeOS 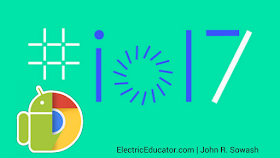 Google I/O is an annual developer conference organized and hosted by Google. I/O is an important event during which Google announces features and products that are in development. Some of these products and features will make their way into the classroom.

Last year during Google I/O we learned that Android Apps would soon be available on Chromebooks. Over the past year we have seen access to Google Play on Chromebooks slowly roll out to select Chromebooks as an option beta experience.

Using Android apps on ChromeOS has been less than awesome. It has been pretty bad. You can read my previous posts on the reality of using Android on Chromebooks.

During Google I/O 2017 Google offered a session for developers called "Android Apps for Chromebooks and Large Screen Devices." Not surprisingly, Google has identified a few big issues that developers need to fix.

You can watch the entire session here, or read my summary below.

Using an app designed for a small, portrait phone, on a large, landscape screen is not enjoyable. This is the primary experience when using Android on ChromeOS right now. Google received a LOT of feedback from early users indicating that this was a major barrier preventing them from using and enjoying Android apps on ChromeOS.

Considering screen size and orientation is also important for convertible Chromebooks which can be put into tablet mode in either portrait or landscape format. The more developers take these use cases into consideration, the more their apps will be used.


Google is recommending that developers optimize their applications for large, landscape screens and take advantage of the larger screen by developing new layouts to display content.

Android Apps aren't designed to take advantage of the keyboard (why would they?). But on a Chromebook you can. Google is recommending that developers build keyboard shortcuts into their apps, just like desktop applications. They demonstrated this feature Lightroom by Adobe.
While keyboard integration might not seem like a big deal, it really is once you realize how often you use ctrl + f (find), ctrl + c (copy), ctrl + a (select all), or use the arrow keys to navigate through selection screens.

More and more Chromebooks are shipping with an included stylus. The stylus is useless if developers don't take advantage of it as an input device. This means optimizing apps for pressure sensitivity and recognizing a palm on the screen to avoid false input. Google demonstrated the app Squid which is already doing this.

What this means for teachers and students

Do you need to care about what is happening at Google I/O or in these developer sessions? Kind of. What Google is telling developers today will make its way into the apps and products that you use tomorrow.

Today, the experience of using Android apps on a Chromebook isn't very good. But over the next 12 months, as developers optimize their applications for ChromeOS, you can expect the user experience to greatly improve. To the point that you might actually want to use Android apps on your Chromebook!