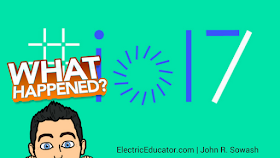 May 17, 2017 was the opening session of Google I/O, an annual developers conference organized by Google. This is one of the signature public events that Google organizes annually and usually contains some important new products and features that are planned in the next 12 months.

During the 2016 I/O conference we learned about Google Home, Android Apps for Chromebooks, and Google's VR initiatives. You can ready my review of the 2016 conference here.

I watched the 120 minute opening keynote during which Google shared their vision and plans for the next 12 months. Honestly, a lot of it is super nerdy and over my head (the word "petaflop" was used multiple times; and people cheered ).

You can watch the entire 2 hour keynote here, or you can read my summary below. = )

As an educator, I am primarily interested in the features, products, and services that will impact teachers and students in the coming year. My summary focuses on those elements of the keynote.

Google continues to work really hard on artificial intelligence / machine learning. Google CEO Sundar Pichai believes we are moving from a "mobile first" world to an "AI first world." Google's work in machine learning is already impacting you on a daily basis:

With Google Lens, your smartphone camera won’t just see what you see, but will also understand what you see to help you take action. #io17 pic.twitter.com/viOmWFjqk1
— Google (@Google) May 17, 2017

Classroom implications for machine learning: accessing information is becoming easier and easier; even when you don't know what to search for. In the very near future, students will be able to snap a picture or ask a verbal question to find what they need. Finding information is no longer a challenge. Teaching them what to do with that information is the critical skill we need to focus on.

Interestingly, the only mention of Chromebooks came during the portion of the keynote dedicated to Android. The blending of ChromeOS and Android continues to be a top priority for Google. There are other sessions during I/O that will hopefully yield information about the future of ChromeOS.

Google did mention that Chromebooks now comprise 60% of classroom devices. That's up from 53% earlier this year.

Google has devoted a lot of resources to virtual reality. Specifically, the development of Daydream, Google's VR platform. This year Google quietly included augmented reality into their VR segment. They announced a cool new capability called VPS (Visual Positioning Service). VPS is very similar to GPS in that it helps identify your location. But while GPS uses satellites to triangulate your position on a map within a few feet, VPS uses visual elements in your surroundings to triangulate your position to within a few centimeters.


Later on in Clay's presentation he also shared an update on Google Expeditions, the VR kit for schools. Over 2 million expeditions have been taken in classrooms around the world. Starting in 2017, Google Expeditions will also support Augmented Reality tours. Take a look:


Expeditions AR is not yet available to the public. You can register your school as a "Pioneer School" here.

While Google I/O 2017 didn't reveal any major new features or services for the classroom, it provided a glimpse at Google continued efforts to organize the worlds information. Machine Learning and Augmented / Virtual reality are top priorities. These technologies will certainly trickle down to the classroom and impact how we teach and the skills that we need to prepare our students with in order for them to be successful.
John R. Sowash at 11:44 AM